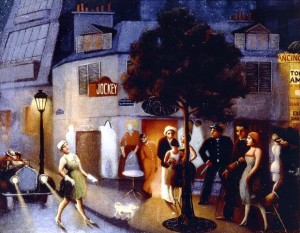 tickled my chin as it dripped down on the current edition

of “The Crisis”.  I was a long way from home and along way

in a little Blues Café on 135th Street in Negro Harlem.

making love to my ears brought me very alive.   I couldn’t believe my eyes

as on the walls were fancy paintings of the richest kind

of African art and surrounding me was the laughter

of faces just like mine.  Some darker, some lighter,

some beautiful and smooth and some rugged but defined.

A young gentleman around my age tapped me on the shoulder

offering me a cigar.  I politely declined

because I had a different kind of smoke on my mind;

artistic expressionists in history from the south to this place

that I woke up a part of.

A sultry voice danced its way from a small stage;

A woman of heavenly eyes and a graceful tune

massaged the atmosphere with the soft fingertips

of her vocal chords.  Bessie Smith was a woman

my grandmother idolized, and there I sat

in this escape into the nostalgia of a movement.

The man behind me was soon joined

by a group of gentlemen in fancy suits

with smiles tap dancing through the dimmed lights

as the shadows of day turned to night.  They were poets

because their words were lyrical and the admiration they had

towards each other rhymed in a delightful flow.

I turned around to see the pages of their faces;

named Langston Hughes.  They jived about the news,

the female poets were establishing their own expression.

inside the fascination of a time defined.

It was a time where the negro became beautifully Black;

A time where the ghosts of slavery became the freedom

of self value; a time “Black” face became no longer a mask,

but a distinguished pride in the souls of these artists.  It was a time

and I was there.

drooling warmly against my face.  I wasn’t in Harlem anymore

but their faces were still written in my thoughts.  Their words

inspired and influenced the soul of my muse.

I was still there,

because what happened in Harlem

has brought out the beauty of my mind.