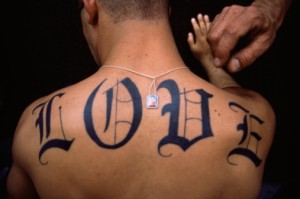 I guess I was afraid….
….of being seen as anything less than a man.

I felt trapped inside the walls of societal expectations, inside my family’s vision and inside my own hope to be normal. I didn’t want to be the one slurred at and pointed at as different. I didn’t want to be called a sissy or queer for being me but as reality set in; my inner feelings had to learn to accept this life. And as I watch them almost every weekend in a local bar I understand them because I see through them what I life could’ve been if I remained hidden. Like them I could’ve been married with kids on the outside but on the inside living on the down low, lying to manufactured life hurting those who think they know me all the while betraying the honesty of myself. I sometimes wonder where their wives think they are when they are out exploring their temptation and when they are out having drinks with their only companion known as the truth. As I notice them, they seem to be enjoying this only time where they can be themselves. I pay attention because I could’ve been them if I didn’t embrace myself just in time.

One is an older gentleman who hides his eyes just enough to reveal his stare. He stands in corners, gives false names and knows how to play the game. Sometimes he is just a whisper but other times his voice is heard when he finds his comfort; married with four kids, a city worker, taking a chance just by being there. Taking a chance by exposing himself in a world he knows he belongs by risking the years he built to be who he felt he had to be to become his identity. Every time I see him I think about the life his wife thinks she has lived and how her own health is a risk every time he allows a stranger in his car. But this is the road where closed mindedness and the fear of non-acceptance have led him. A destination where he can only be who he is on a weekend night, on a bar stool rubbing the thigh of a man he can only meet once.
And the other is slightly younger, more vocal and doesn’t mind exposing his life. He says he has a great sexual relationship with his wife but he desires that closeness with other men for those moments during his few hours out. He doesn’t openly hide because he’s a people’s person and enjoys the company of those he feels he connects with. But he also lives a lie that disconnects him from the great relationship he claims he has. And perhaps he does but that fear of revealing himself to her demonstrates knowledge within himself that he is not fully happy with the path he has chosen. He is an undercover man lover stuck in a world he believed in. He followed a road that told him the only definition of a man was being with a woman. A destination that has him running to his car at 11:59 pm to get home five minutes before his wife so she thinks he’s been home all night.

They are two of many living a separate life because of that fear of non-acceptance and they are two of many living this reality. These are not just tales, this is real life. These are husbands, boyfriends, priests, politicians, celebrities on the down low because they are afraid for people to know. And any one of them could’ve easily been me if I didn’t recognize the path my life was taking by hiding.

I guess I wasn’t afraid…
…to be seen as More than a man.

© 2010
Tarringo T. Vaughan
Diary Of A Gay Black Man: Hiding to be seen