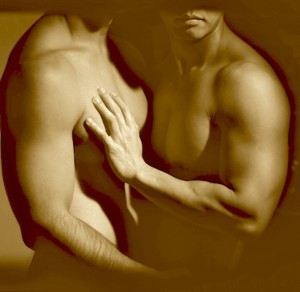 Although I believe homosexuality is something you’re born with, in my childhood years I really never thought of men sexually. It wasn’t until my years of puberty that I began to wonder about the adult man body. I always used the excuse to myself that I was just curious about how “big” I was going to get. In time It turned into a fascination that eventually turned into a forbidden lust to be with another man. I hear tons of stories from guys of how they explored with buddies as children so it makes me wonder how normal that actually was. When does the physical lust turn into the emotional feeling for one of the same sex?

I’ve have many discussions about this lately but I’ve defined homosexually or any sexually as the emotional attraction you have for someone. Because quite frankly, I can still physically have sex with a woman but there would be  no emotional attachment. Definitely not the same feeling as being with a man. And ladies please don’t take offense to that because I assure you it’s nothing you did wrong because I do believe the female body is one the greatest creations.

Curiosity is a human trait, something we all naturally have inside of us. Some of us have a stronger desire to act on it or even want to act on it. My view of the world has always been that life is short and there’s no other way to really find out about who you are than to explore and experience the unknown. And eventually I took that step at the age of twenty-five. The curiosity became so strong that I just had to know if I was a gay man or just a man who would screw anything with feet. Now my first time with a guy wasn’t good at all, but I knew that was just the guy I was with. He had no clue what he was doing so from that experience and knowing that I wanted more, I realized my sexuality.

But I still had denial. I felt I was too masculine to be gay from what I saw out there. I still was very reluctant to step in the gay bars downtown. Gay men simply freaked me the hell out because of what I was exposed to growing up and what I saw through the media. Gay meant AIDS, Gay meant dressing as a woman, Gay meant getting your ass kicked and Gay was not something I wanted to be. But finding others like me and discovering that there were tons of people who felt Gay was cool and supported it made me more comfortable exploring this curiosity.

Yet I did continue to live life on the down low. I wasn’t afraid of what people thought of me because I’m a very self depended person and if someone can’t accept my package then they are not worth having. I just believed that it wasn’t worth the stress of bringing attention to me. For example, as a black man why would I choose to go in a KKK neighborhood in the Deep South preaching “Black power”? There are just situations you stay away from. Where I live is definitely not as severe, but if I know walking down the street holding hands with another man Is going to bring attention and stares, it’s just not the attention I’m looking for. I know there are other gay men who would strongly disagree with that, but we are all have our different comforts in life and we should be respected for any way we want to approach them. All in all I’m happy with where my curiosity has brought me.   I’m established, building a muscular body, growing with my writing and have tons of readers who follow the emotions of my heart and mind. And I wouldn’t be who I am if I was still hidden deep in the closet.  Just remember, there’s nothing wrong with curiosity, it helps build who your meant to be.