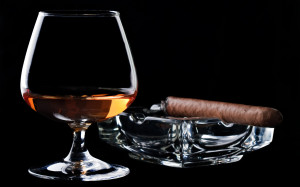 I never liked the taste of lies,


like a half sip of cognac they are tough to swallow.

So I should’ve known better than to trust a man who couldn’t look me in the eyes. I should’ve known better than to believe in him after my intuition told me that he wasn’t any good. We meet on a warm summer night about six years ago and hit it off right away even enough to share some beers and a couple shots of Hennessy over a few games of pool. I didn’t even like Hennessey but this guy had a smooth way of talking people into things. He had a convincing way about his actions but one thing I quickly noticed was his eyes would never meet mine. But I was new to the scene and vulnerable at that time because I was in search of friends in this new world and I wanted to take a sip of perhaps something more; I wanted to taste what intimacy was like on a deeper level. Despite the lack of eye contact we became quick close friends and even explored romance until the warning from others came. I was told not to trust that damn fool but once again he was convincing enough for me to take his words over people I barely knew. And what he convinced me of was that “fags” were envious and just a bunch of gossip queens. I had just enough experience during that time to buy into it.
Sometimes you have to take in a little of the false to get a whole lot of the truth.

Over time he became my roommate and the true colors started to show. I instantly knew I made a mistake but still wanted to believe in him. He lost his job so he said but claimed as a Car dealer he could find another job whenever he wanted. He was a quick talker and a master of bullshit if you tell me and he played the role with an Oscar winning performance. Enough that mutual friends begin believing that I was the one treating him like a pair of raggedy ole sneakers tossed over a telephone line. They started to believe I was making his world miserable. Seriously that’s how good he was. And all the while I had received bad rent checks and bills unpaid to go along with a whole bunch of stress I thought I was too young to die from but it was killing me. Living in my own apartment for that period of time with someone I bonded with over shots of cognac because a miserable time for me. And to think I never liked the taste of lies but I was taking sips of it daily until one day I came home and all of his stuff along with his deceit was gone and never heard from again. And then after all the stories and signs I should’ve seen stood clear in my mind. It definitely was a learning experience for me at a young age of independence. It was a defining period in my maturity level and a reason why a half sip of cognac goes down much smoother than a full shot of lies.

Diary Of A Gay Black Man