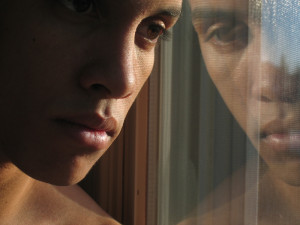 …and I didn’t belong there,

but for that moment, I wasn’t supposed to be anywhere else. We didn’t have much in common except we were men, unattached and seeking companionship. He talked nonsense and I nodded my head as if I actually had interest. But we were there, sharing time because either one of us had anywhere else to be. We sat at the bar of a local restaurant studying the loud crowd around us as we wondered if the atmosphere was interpreting our body language as our linguistics was of two men just introduced as strangers barely even making eye contact. I thought I was over weird moments like that; I thought I was at a new place in life where I could turn awkward moments into an easy laugh. It wasn’t that he was not easy on the eyes; perhaps he was even interesting if I took the chance to pay attention but it became apparent to me that I wasn’t ready to meet anyone new. My heart was still in that nowhere zone hearts go when healing from the wicked ways of love.

“So, tell me more about yourself”, he said.

“Well…” I responded as he anticipated. The thoughts in my mind during that long pause were of disbelief that I was in this situation again. What do I tell a man who I already decided I was never going to see again? But then I thought how cruel I was being and I was being like other gay men I’ve encountered who pretend and go through the motions. Well I thought I was being nice so I told him the easy answers and that’s where we found a connection.

There was something in the way I hesitated to tell too much about me and something in the way my eyes looked every which way but at his interest that felt familiar to him. He was a taller man with mixed Irish-Italian features just moving to the area from Florida. He was seeking a new beginning and that is what attracted me to his profile on an online dating service. It was a risk for us both as we were both just out there with our hearts shattered just seeking that something that would make our belief in love beat again. So we decided to listen to each other because we were there, with nowhere else to be. Two strangers sharing a similar disappointment just seeking a common place in a moment called nowhere. That night I learned that I would feel again because I discovered how to communicate my pain and I wasn’t alone. And I didn’t belong there but I was meant to be there. Because it was there, on the other side of nowhere that I knew my heart had someplace to be.

When we heal, we teach.