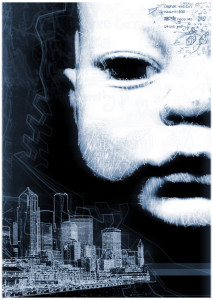 Youth whistles his name  — twelve years of life balancing
between eroded curbs just on the edge of Hancock street.
He wears grown man shows on his feet and abandonment
on his mind as he studies parental strangers with a false toughness
but in his eyes is the vision of a child brought up in an
environment of roughness/forced to grow up too fast
by the elements of survival and a reality he fears he won’t outlast.

he is somebody’s child out there roaming alone searching
for something to recognize as a dream.  He hopes…but finds
himself on the daily hustle because he feels he has no choice/
his cries have gone unheard and there is fear within his voice
as his heart echoes to be held by the hands of love;

and he is somebody’s child wishing he had a place to call home;
a place where his thoughts are defined and his tears
touched by meaning; a place where he is embraced and a place
that recognizes his face

all he wants is to be seen
because he is somebody’s child…he is our child.