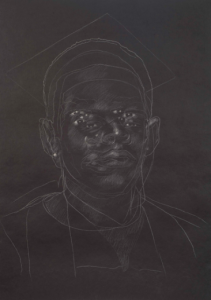 the injustice of equality no longer paused on mute.

begging you to see, that even as an educated

black man the sirens of brutality still scream towards me.

At just the young age 12 police targeted my skin

not because I committed a crime, but simply

that was my only sin.

I fit the description – questioned

just because of someone’s fear and fiction.  I was accused of being

trouble even though I was not one to step outside

morality’s bubble.  I had dreams, but at that moment

I realized what hopes I had could be dashed

in a flash if that someone decided I was the one

that was the description; any chance of a future would’ve

I was presumed guilty, but what they never assumed

was my innocence, because I was –

I was just a child coming home from school;

A poetic dreamer who wasn’t even considered cool

I was a mama’s boy studying to find a way

that was constructed to hold me down, but in their eyes

there was nothing I could say.

Now today as I look back I frown, not because I was accused,

but because I allowed that moment to abuse

the mission of my mind to achieve and the intuition

of my heart to believe; any goals I had almost drowned.

I allowed that moment

to temporarily halt my desire to be a somebody.

Luckily it didn’t shrink me down into a nobody,

and that’s what scares me.  So I write America,

not for your sympathy or even your empathy–

I write to give you an example

of why the lives slain on the streets

of why those suffering daily just to survive

of why dark skinned children in failed education

and most importantly why Martin, Malcolm and so many other’s who

marched on the streets of civil rights lost their lives

so that today’s Black Lives could Matter…just the same.

I write America — to give the ink of courage and equality