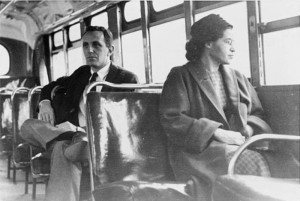 She saved my life on a Thursday, brave “colored” soul;

a woman strong – an inspired spirit – stubborn to inequality,

showing the world in 1955 that she and everyone else

who shared her skin that we did indeed belong.

She saved my life on the first day of December, two decades

before my birth, twenty-one years before my own soul

began to explore this earth.  I didn’t know her, but she

refused to give in to the abuse of discrimination

She saved my life that day in Montgomery, Alabama

because she was simply tired of standing on worn feet;

symbolized by the history of ancestors once enslaved,

there was no way – on this day- that she was giving up her seat.

She saved my life on that Cleveland Avenue city bus

because the history of her skin would no longer

allow her to be ushered to the back of the bus.  She was tired

drenched in blood stains.  She was tired of crying the tears

only her own fears could hear.  She finally spoke up by refusing

to give up a seat she felt equally belonged to her.  No matter the consequences,

she no longer cared

she was physically tired of being told she was the lessor,

and decided –on this day- that it was time to overcome;

It was time to overcome the many decades negro dreams

have starved for the opportunity of freedom; the many years the system

abused the hopes of the people she saw reflected in her past,

present and future.  She sat and refused to give up

Rosa Louise Parks saved my life on a Thursday.

Before I even took my first breath, her determination

showed me the passion to express and become a voice;

before I even took my first steps,  her bravery

allowed me to stand tall and strong in my own skin

and before my eyes even began to see the prejudices

of an unjust world, her incarnation led

to the freedom of my vision; a vision of equality

and the integration of all souls as one unity.