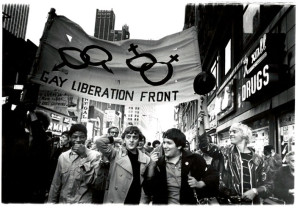 that fought back against oppression and a voice that vibrated

within the echoes still heard today against

the refusal to be treated as second class-citizens;

it was a moment in the history of this nation

that sparked a new celebration; a new pride of a people

paving the way towards new freedoms of equality .

It started as a raid, but ended in the rise of the self-made;

the proud members of the Gay community

who soared as founders of a movement that started

on Christopher Street and now marches on

in recognition of how far we have come.  The will to strive, to prosper

and to advocate ignited a flame that summer morning

in Greenwich Village; a flame that has become a fire

of momentum that continues to burn as that united voice

still shouting from the foundations of the Stonewall Inn

to the front stairs of the United States Supreme Court, where,

on another day in June, 2013, struck down the Defense of Marriage Act

giving way to a string of decisions

that has ruled state bans on gay marriage unconstitutional

on a path that will eventually lead to the full rights

of all of humanity.

Today that united voice has reached out and extended

in a full force of pride

to break the inequality of anti-gay laws threating silence

and extinguish the harsh punishments gay men and women face

And it all started on a night in June; a night where

the liberation of a voice

we are proud to be who we are

and being ourselves is our right, our freedom, our courage

and most of all