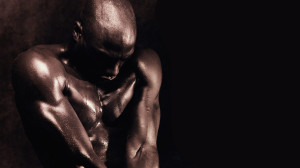 Lanky, skinny, black boy, age of sixteen years; shirt from k-mart, pants from sears. He sits alone at a cafeteria table with no one to occupy his time. They giggle, they whisper, they point at the toe exposed from the hole in his sneaker, they barely know his name. He’s so quiet, shy, can’t look anyone in the eye. And thinking back to my high school days, I can’t believe this boy was I. Yes this was me. And I remember sitting at that table alone, standing in corners of playgrounds alone during my early years of high school because for me it was easier to keep to myself rather than face the name calling, the insults and jokes sure to be thrown my way. Or perhaps this was all paranoia on my part. Deep down inside I always knew I was different, I just wasn’t sure how. It was easy to believe it was the clothes I was wearing or the way my sneakers squeaked as I walked. But I knew, yes I knew even then there was something different about me.

Nothing about me as a teenage boy was all that different in appearance besides the clothes my mother got off lay away that I wore. I had crushes on girls so I thought; I played sports, loved junk food and watched wrestling on Saturdays. But in school I still refused to allow myself to open up. It wasn’t that I didn’t want to, it’s because by doing so I would be exposing that inner secret. A secret that even I didn’t know existed. The way I looked at Eric, the way I got along with Miguel was weird feelings. And the fact I couldn’t keep my eyes off of naked boys in the shower told me something I was afraid was true. It told me I was gay. My secret became my loneliness.

An unbelievable transformation took place as I entered college. That lanky, skinny, black boy, now nineteen years of age became popular. It was like being away from home just opened up my humor, my intelligence, my being. That empty lunch table now surrounded me by many different kinds of people who sought out to know who I was. And they say college is a place we find ourselves, and I’ll say that’s true. Not forgetting who I was, I extended my hand to any kid I saw as a loner. I became the life of parties, the social organizer, and the kid no one could stay mad at. But still, there was ridicule and certain people I went back into my shell around. It became a different kind of loneliness because I had to be the person everyone expected me to be, there was no way I was gay in their eyes. How do I tell my best friends that after dancing with girls at parties, that behind closed doors I was looking at gay porn? How do I tell people I hear using the term “faggot”, that indeed they were hanging with one? Popularity brings loneliness when no one sees behind lonely eyes.

As an adult and someone you all have read as a very open person it all started with levels of loneliness. That feeling that no one will understand, no one can understand helped me realized that in all reality there’s always someone who will be there to offer a hug. As a man who has defined himself, I still have that loneliness because once again people see me and assume I got it going on. I must have tons of men knocking down my door. But the problem is they all assume the same so no one is knocking. As some of you know, there is someone lightly tapping and he has been for over a year. When I look at him I see an older version of me, we’ve probably traveled different roads but along the way we’ve experienced similar experiences. We are two lonely guys who choose to be lonely instead of hurt. The gay world, the world in general can really injure a heart to the point where it may take a transplant to fix. And the way families abandon children who they find out are gay ends up being grown men and women eating Thanksgiving alone and no gifts under Christmas trees; lonely because of non-acceptance.

My words as a writer become my friends in those moments I feel that loneliness. To have someone just to lie next to and wake up with is fulfilling sure. There are some weekends I do have that, but to just know there is someone out there who puts you number one is the ultimate feeling of importance. So I end this volume in saying that we can’t be loved until we are ready to show the world who we are. And we can’t love until we face our levels of loneliness.