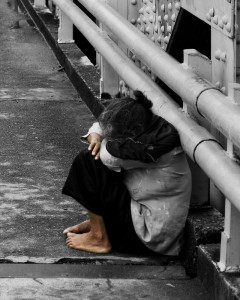 She was a whistle sitting silently in front of corner store
with her home wrapped openly around her
exposing her life and the orchestra of her tears.
But no one seemed to care
as she was stepped over and stepped past
Like an object just in the way.

Everyone seemed to ignore what her eyes have to say.
I stood there at a cross walk
In the middle of June day with sweat
dripping rapidly down the back of my mind
as I caught the song of this woman who was sometimes there
and sometimes everywhere
but often nowhere. She had a stench that hummed
for a nice bath filled with hope
because for years she has had to cope
with the stares and coldness
of a world that pretends she is just an excuse.

Her pride has been kicked with abuse
as the slow tempo of her voice has asked for help.
She wasn’t America’s favorite song
but the way she caught my attention
there was no doubt the singing of her presence
was a vision that did belong
as she sung to me.

She was homeless but her strength
stayed strong and in her lyrics was a woman
who had dreams that were battered
by the fist of a mental illness that kept her
unable to hold on to the definitions of herself.
She was hungry but her starvation
was the neglect from the hands that failed
to reach back as she grabbed
for a recognition to be understood
and to just be seen as a human being.

She was angry but continued to smile
because she knew she was a song
with lyrics that could change a life
if one just listened to the sight of her
sitting there covered in clothes that haven’t been
washed since the last time she was able to laugh
which was the last time she felt she existed.

She sung to me that day a song
with lyrics that has become the music
in my heart.