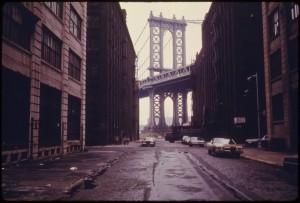 There are times I stand in the traffic of life naked with nothing on
but the clothing of my own mind. I watch faces that barely breathe
and eyes that deceive
those who hope, dream and believe
that our streets can exist without the propaganda
of intellectual thieves;

I watch strangers become categories; nameless figures traveling
as allegories just long enough to have a symbolic meaning
on the abstract sidewalks where footprints sweat steadily
in the humidity of historical value.

Everyone scrambles to the figurative modes
of a future but

time seems to be the game they play. Everyone has
somewhere to be but on any given day
the victory is a last place finish to nowhere.

There are times I am amongst them; a hidden narrative
just waiting to be exposed by one of those dreamers or
or by one of those believers. But often, I too am deceived
by what I perceive is my purpose. Every day is a challenge
to allow this face to breathe; to allow this mind to form rhetorical
thoughts as I suffocate in crowds of loneliness

waiting for just one sign of air. There are times
I wonder who even cares as one day I am just an anonymous
commuter traveling past stop signs to find another beginning
with a new end and on another day

I am one of many artistic figures creating difference
through the streets of Brooklyn; a character in someone’s
visional fable challenging the blind to wake up and see
the importance of

the smaller things and the destination of creation
when we allow ourselves to be written. We all are given a script
on this stage of life but it is those who improvise who are able
to stand out and rise to the applause of challenge
and it is those who become the new innovations
through the daily acts of living who take a bow

in the encore of life’s standing ovation.