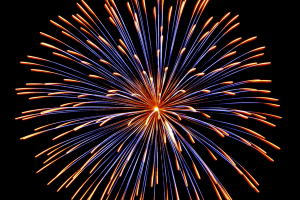 A lazy day of summer is romancing tranquility
as these thoughts formulate. My mind has becomes lost
inside this abstract nature of poetic haze.

Last night, while thinking,
I watched fireworks explode into colors of sparkling
magnificence over a dark sky bright with American pride.
So many people of different shades, languages and ages
came together in celebration as the sounds of freedom
vibrated off the skyline of liberty. For the moment,

it was amazing, but I knew once the finale
ended in peaceful applause that this society would return
back to the chaos of clutter as observers turned frantic
in their mad dash back to vehicles taking them to different
locations of traffic – but still traffic.

So many people in one location always make me nervous.
I often wonder why, but I’ve came to terms
that when that many shades of the human condition
collide, someone is going to find an argument of blame
or a misunderstanding creating shame with the results
being someone being called something other than their name.

and I… looked on last night – eyes to the sky – just enjoying
the brief discovery of unity. I was a journalist of thought
last night. I sought answers to questions that only
time could control but still my mind stayed on patrol

analyzing situations while crowds of drunken reality
passed by. This was America’s birthday but it became
a reason for idiots to act like fools and for fools
to believe in their own genius

just walked along the sidewalk searching for balance
on curbs shadowing silhouettes of clarity and prose.