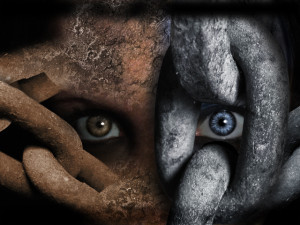 There was a time during my growing up days where I searched
to unlock the chains of my manhood. I was young/ eager/ ready
and willing to take on that world out there; a world
that held the voice of my bravery under lock and key
for so long.
There were those moments I stood on the edge of cascading curbs
behind unbreakable bars clutching to break away
from the captivity of silence. And I watched my dreams
scream to me to break free but I continued to stand still
as windows refused to open and doors slammed shut
against the progression of my strength.
And I was a prisoner
seeking an escape from the closed in walls that tampered
with my ambition to take on that world that dared me
to challenge it’s victory as my own. The key was hidden
within the barriers of my fear where my mind had to become
the apprenticed locksmith to release the man I desired to be;
a man baring confidence set free into a world harsh and off the chain.
© 2010
Tarringo T. Vaughan
from Beyond Rainbows & Yellow Brick Roads
Purchase at:  at Barnes & Noble
Share This