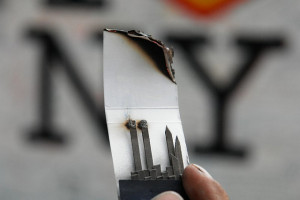 Today life is a poet as on this day of remembrance it has become the face
of every emotion, the fear of every hand and the hope
in every heart.  Today is more than a memory—today
is a recognition of unity, faith and strength as we gather
together to remember the tragedy within the day ten years ago
September.

As September cries, I remember being a young man working
the morning hours of an eight hour job counting down
the hours to head home.  I took life for granted but on this day
as the news traveled of a plane flying into the World Trade Center
time became still.  I wasn’t one of many watching in terror

but I was there;

I was there
hoping through the heart of a wife breathing in debris
and praying that her husband make it back safe in his heroism
as a firefighter and his bravery as a man, but recognizing
in the collapse of building one that he may never come home/

and I was there
sharing in the spirit of humanity.  I was there horrified
but instilled with patriotism experiencing the strength of a country
and the many faces who became the stories of heroes on that that/
of the many names that became defined and forever remembered
as life’s poetry—more than words, but journeys
that will be felt forever in tomorrow’s generations.